"Should I visit Ischia or Procida?" is a question we hear often. It's hard to decide which island would be a better base for your holiday or day-trip destination from Naples. Ischia and Procida are both set in the Bay of Naples, close enough to each other to be considered "twin islands". They share the same volcanic origins and spectacular views across the Mediterranean Sea, but are otherwise quite different in size and character. So should you choose Ischia or Procida? Here's a detailed comparison between the two to help you decide which is the best fit for your vacation!

Ischia or Procida? The Big and Small of It 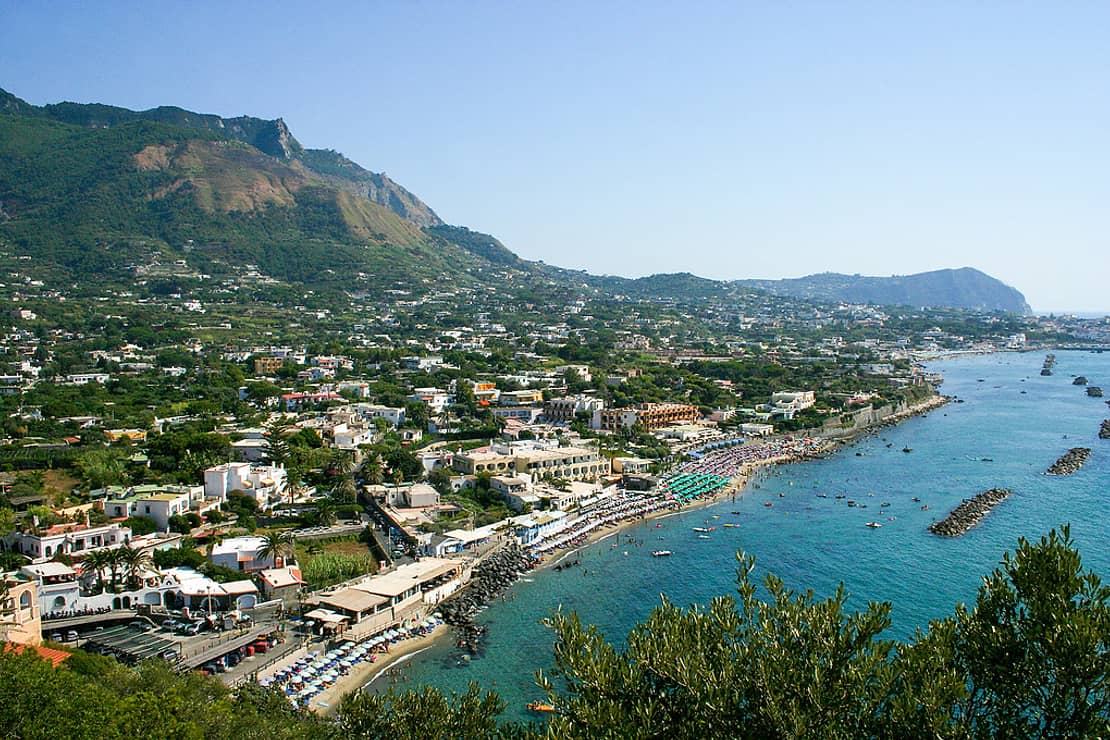 Ischia is a relatively large island covering about 46 square kilometers (18 square miles) with six different towns. It would take several days to visit the entire island, though you can take in the highlights on a day trip to get a sense of its beauty. There are buses and taxis on Ischia, or you can rent a car, motorcycle, or scooter.

How to Get Around the Island of Ischia

Procida, instead, is the smallest of the three main islands in the Bay of Naples, covering just 3.7 square kilometers (1.4 square miles) with just one municipality that also includes the islet of Vivara, linked to Procida via a bridge. Because of its small size, this is the perfect island to visit in a day or head to for a short break. 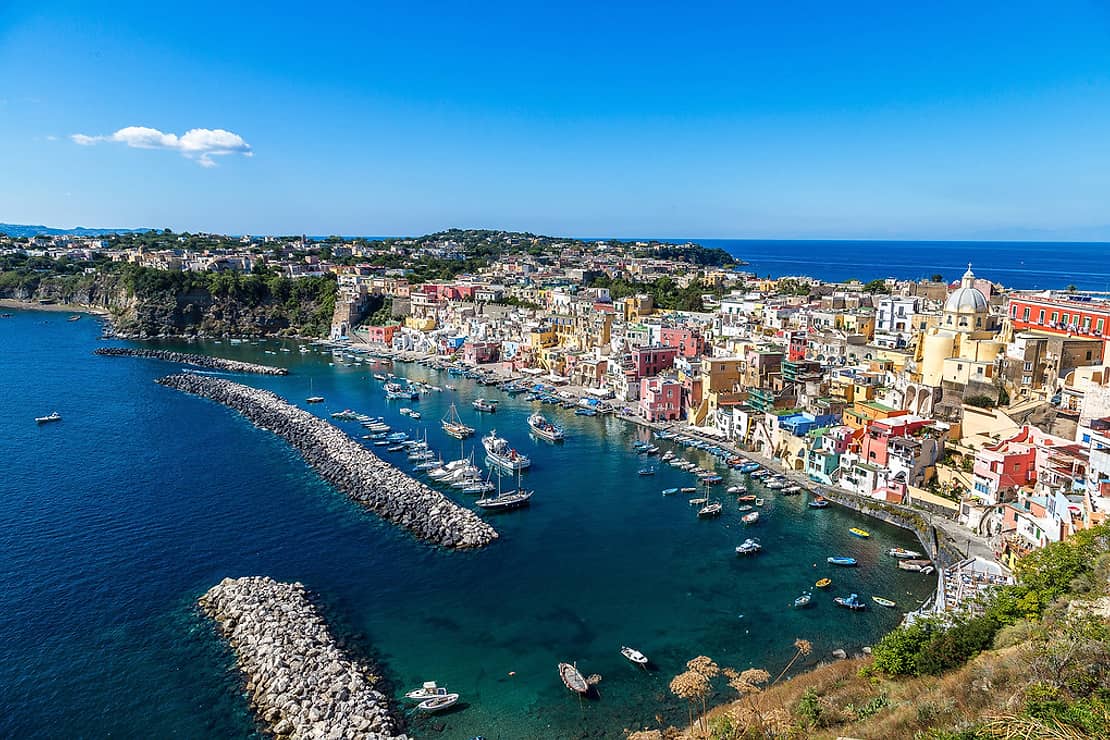 A Day Trip to Procida

To get around Procida, you can use the island's taxis, minitaxis, and public SEPSA buses or rent a scooter. You can also explore the island by bicycle or on an e-bike, which makes it easy to take on the few hills.

Are the Beaches Better on Ischia or Procida? 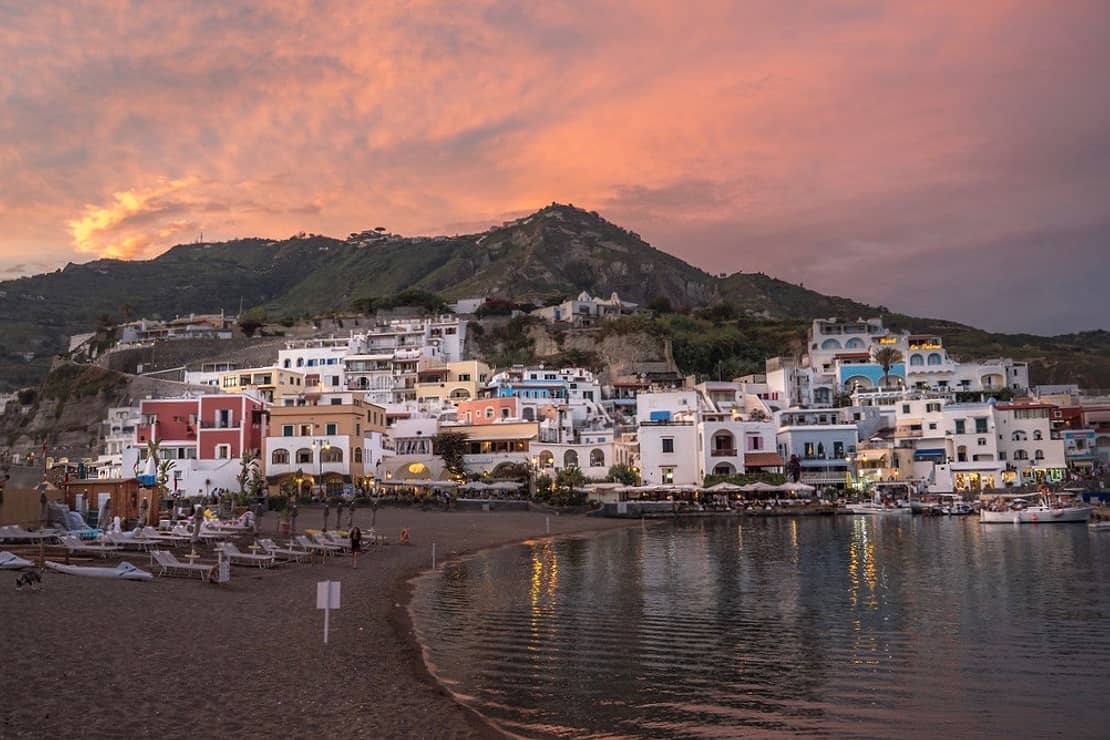 Of all the islands in the Bay of Naples, Ischia has the highest number of sandy beaches, some of which are relatively long and spacious. A number of hot spring spas also include a stretch of sandy beach where you can relax or swim before or after soaking in the curative mineral waters for which the island is famous.

Read more about the beaches on Ischia

There are also a handful of beaches on Procida, most of which have dark, volcanic sand. The majority of Procida's beaches, however, are long, thin ribbons of sand along the waterfront; the few that are larger include the Chiaia and Silurenza beaches. 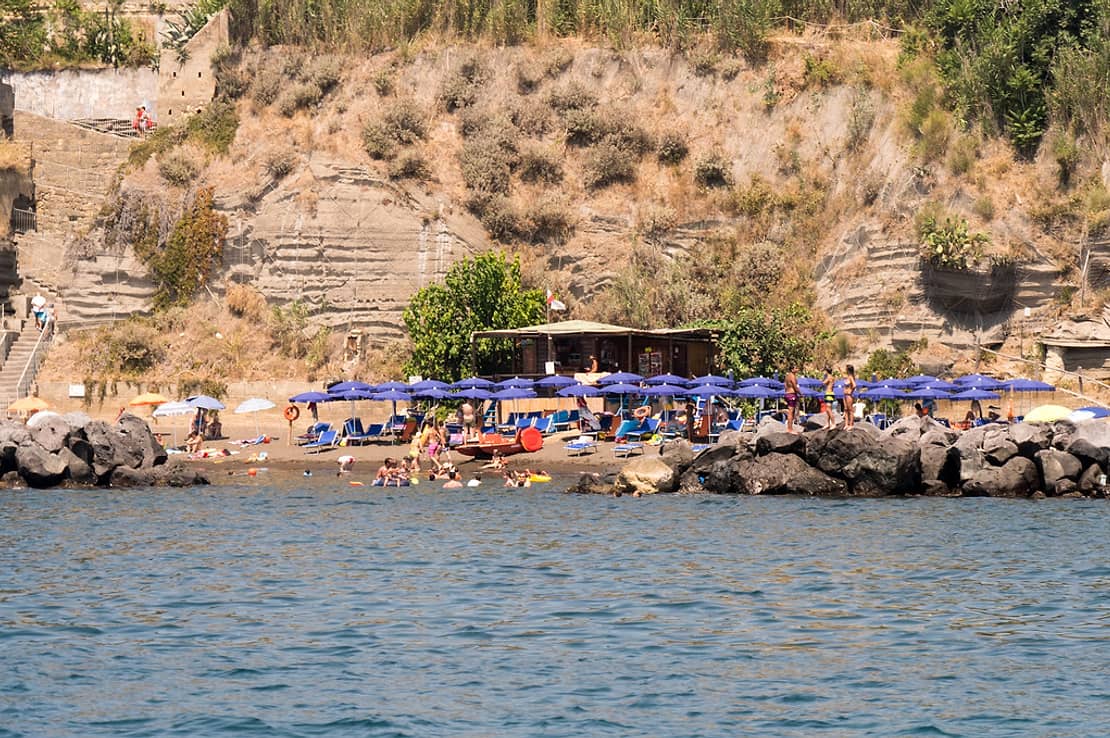 Unlike Capri or the Amalfi Coast, Ischia has volcanic origins that have created the active hot springs that dot the island, with thermal baths and lush gardens fed by these underground mineral waters. Indeed, Ischia has been famous for its natural hot springs for millennia and still today a visit to one of the "terme" is a must when visiting the island! 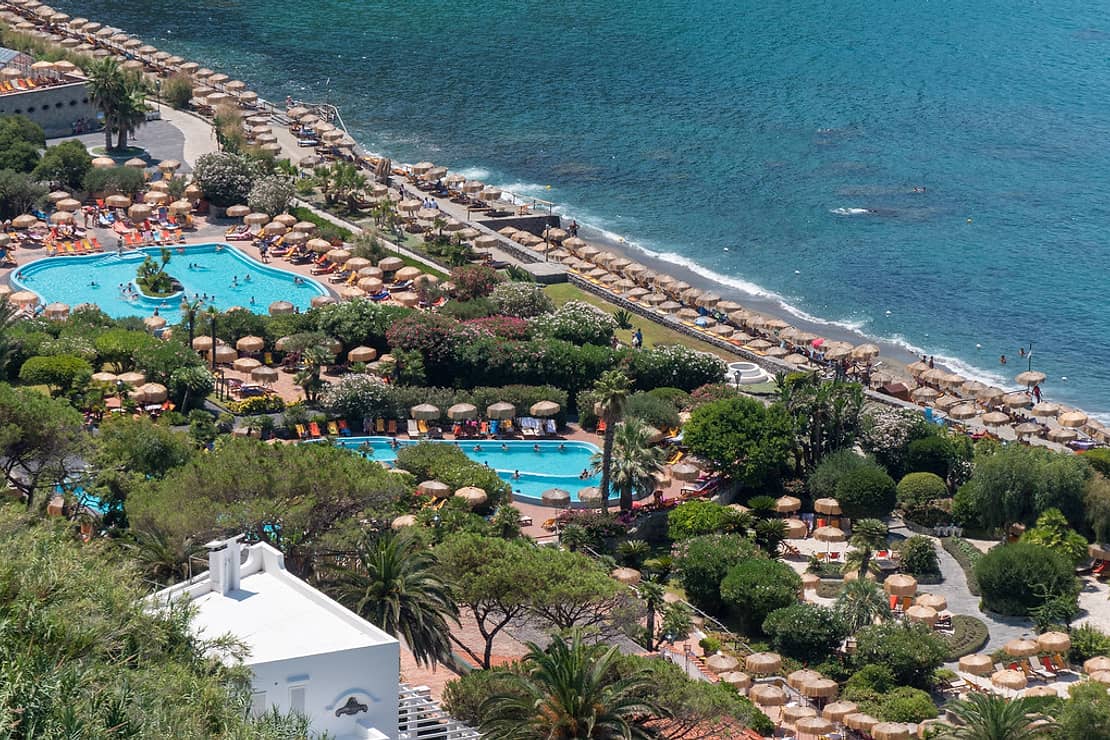 Otherwise, Ischia is almost entirely flat outside of the peak of Mount Epomeo, the ancient volcano that still looms over the island.

Even tiny Procida has volcanic origins and, like Ischia, belongs to the same geothermal system as the Phlegraean Fields. Unlike its larger twin island, however, Procida does not have hot springs nor are there volcanic peaks on the island. That said, the landscape on Procida is slightly more undulating than on Ischia, with low rolling hills on many parts of the island.

Is Ischia or Procida More Charming?

As the larger and flatter island, Ischia has more urban development but there are also more essential services on the island, including shops, pharmacies, and other businesses. There are some areas in which it's easy to forget that you're on an island since you can't see the sea and the vibe isn't very "resort-like". Most tourists on Ischia are Italians who want to unwind in the thermal baths; hotels tend to be small and family-owned, and much of the island is given over to holiday homes. That said, there are a handful of resorts and luxury hotels. 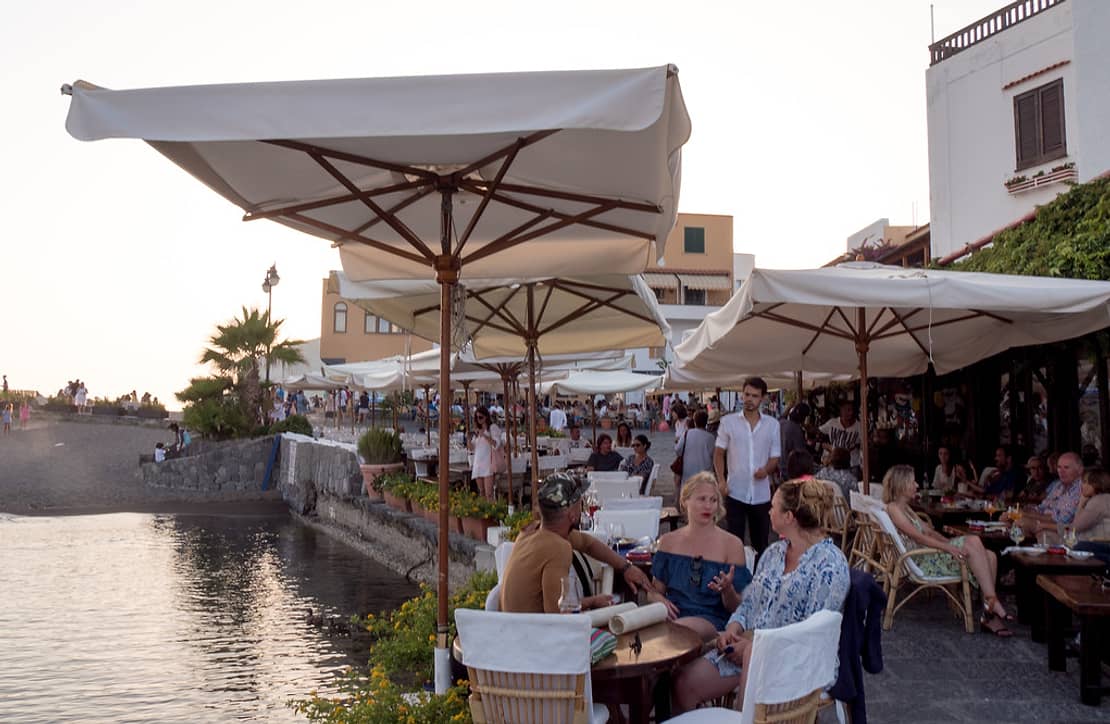 Many visitors to Ischia come back year after year, and the island is also a popular destination for Italian group holidays. Ischia Porto, Forio, and Sant'Angelo are thick with bars, restaurants, and clubs, ideal for those who prefer a lively nightlife.

The pace on Procida is much slower than its larger neighbor, with dramatically fewer tourists and less nightlife. On this tiny island, the vibe is much more relaxed and romantic; only in the months of July and August does the island see crowds of daytrippers and vacationers who have booked one of its many holiday homes. That said, on the offseason, the island is almost too quiet and many shops and businesses close down for the winter.

Procida is where "Il Postino (The Postman)" by the Neapolitan director Massimo Troisi was set and you may recognize the Pozzovecchio beach as the backdrop for a number of scenes in this Oscar-winning film. The island has become a bit of a mecca for fans of Troisi, who died of a heart attack just as the film was wrapping and continues to be one of the most beloved actors and directors from southern Italy.

Neither Ischia nor Procida are particularly expensive destinations and there is a wide variety of hotels and B&Bs to fit any budget. Ischia, the larger and more popular island, has more options for hotels, villas, and apartments, whereas Procida offers a number of campgrounds near the beaches for those who love to sleep outdoors. It's easy to find budget dining options on both islands.

How to Get to Ischia and Procida

Ischia and Procida can be reached via hydrofoil or ferry from Sorrento, Naples, and Pozzuoli on the mainland. 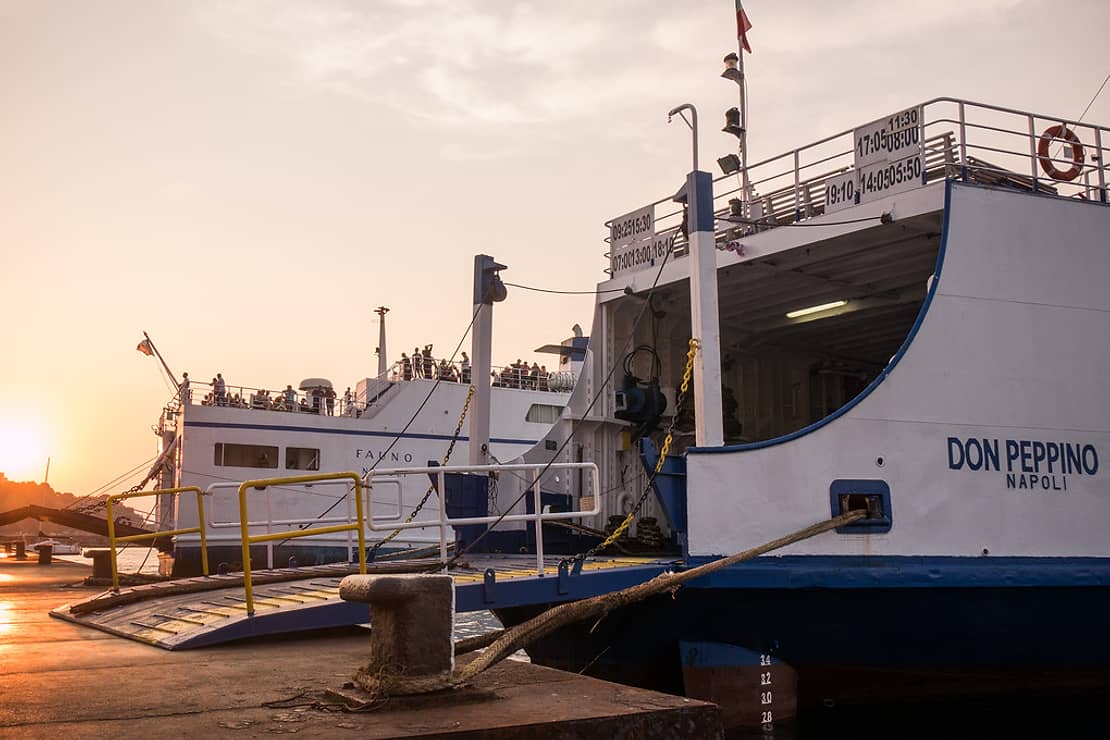 Some ferries coming to or from Ischia also stop at Procida to pick up or drop off passengers. Ischia has a number of ferry ports (Ischia Porto, Casamicciola, Forio), so you can choose the most convenient based on the location of your hotel. Since Ischia and Procida are close and well-connected by ferry, you can also take a day trip to Procida from Ischia, or vice versa.

Schedules and online tickets for ferries to Ischia and Procida

So, Should I Choose Ischia or Procida? An Overview: 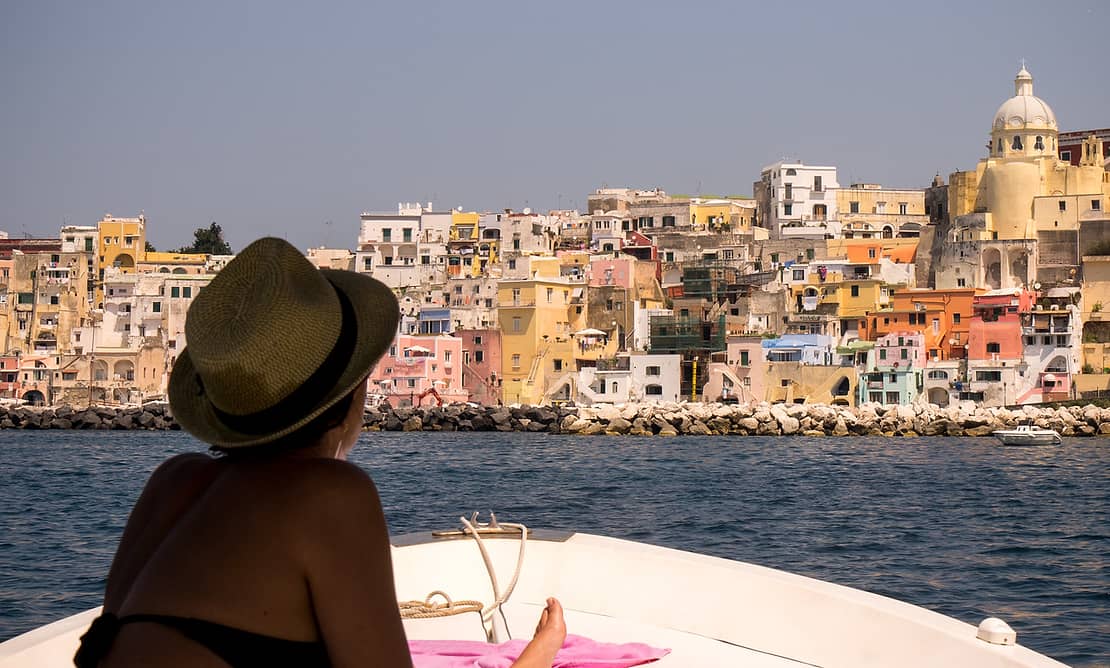 Whether you decide to visit Ischia or Procida, you can be sure that you'll enjoy every minute on the island!

Three itineraries to visit Ischia in one day

Top Things to Do and See on Ischia

How to spend three days on Ischia

Ischia or Capri? Our Expert Advice to Help You Choose

Which island should you visit? Here are our tips.

Top Ten Things To Do on Ischia

Wondering what to do on Ischia? Here are our top suggestions.

Ischia or Sorrento? Our Expert Advice to Help You Choose

Which place should you visit? Here are our tips.

Ischia or the Amalfi Coast? How to Choose:

We live here, we work here, with love

Assistance regarding tours, private transfers, bookings, and other experiences.
We generally respond within 24 hours.
We do not provide information or assistance with booking trains and buses.